Games have come a long way from 8-bit audio and managed to double back again with spectacular results; thus, sound design is an important component in game development these days and often amounts to more than just a soundtrack. The beginning of September saw the release of two music-centric games, Wizard Fu Games’ Songbringer and Worm Animation’s Beat the Game. Considering the recent audio design offerings in both music and effects from games, the pair have a lot to live up to. Here are a few precedents: 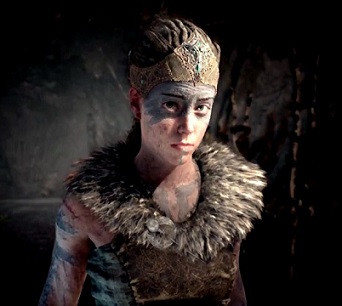 For all its provocative elements, Hellblade has gained a reputation as either you hate it or you love it, and the same goes for its sound design. The persistent whispers in Senua’s head are purportedly sympotamtic of her psychosis. Many players and critics have found the hissing audio to be distracting, unnerving, or intrusive; yet, these uncomfortable feelings reiterate the game’s premise. However, Ninja Theory’s sound design takes the persistent whispering a step further with silence.

More than once throughout the game, Senua’s voices cease. At times, the sudden silence is dismissable, lost among other ambient noises; yet, occasionally, the void is jarring, slightly anxiety-inducing, even lonely. A mechanical byproduct of cutscenes or other audio, possibly. But, what if you suddenly couldn’t hear the birds one day? Or the traffic on a busy street? Or if a friend who called daily abruptly stopped? In many ways, Senua’s silence emphasizes that, while symptomatic conditions of psychoses aren’t “normal,” they are typical for the individuals with them. And, divorcing themselves from these conditions, remedying them, isn’t necessarily easy as it might demand an entire paradigm shift, one that leaves a void in their everyday lives.

Platinum Games and Square Enix knew what they were doing when they pegged Nier: Automata’s “Diva” boss battle for the game’s E3 outing and demo. The fight is a comprehensively stunning showpiece, demonstrating nearly seamless transitions in perspective and gameplay and an awe-inspiring cohesion of action, aesthetics, and soundtrack. The Diva (aka Simone aka Beauvoir) is the Red Queen to 2B’s Alice; she’s intriguing, tragic, and terrifying all at the same time. Her stage is lovingly crafted around sound with attacks taking on the appearance of sound waves and sonic impacts, and the music shifting to a more MIDI-esque style while hacking.

Overall, NA’s sound design experiments with synthesized voices and discordance, replicating an important plot point of the game in which robots begin to assume human behaviors. The Diva’s chuckle has a mechanical grate to it, yet still evokes a sense of derangement. Her songs are piercing and atonal; but, the battle music often swells above the sound effects, creating an odd coordination wherein the human soloist (Emi Evans) becomes Simone’s voice. The latter effect becomes even more staggering with the revelation that the androids lining the Diva’s skirts might still be alive, thus the music’s human chorus suddenly becomes the voices of Simone’s captive audience. Truly a tour de force of game design and hopefully a strong inspiration for sound- and music-based games to come.

Stories Untold, much like the ‘80s sci-fi/supernatural horror it’s influenced by, hides subtle complexities behind novelty. The throwback main theme was frequently praised and compared to TV series Stranger Things (which has similar inspirations), but it was just the tip of the iceberg. The game features no direct contact with any characters, thus most of the story is told through environmental context and interaction.

Most of the background music consists of low, droning notes, and the majority of audio is idiosyncratic with technology from the time. For “The House Abandon,” this combination emphasizes a domestic, ideally mundane, setting. However, as the story progresses, small shifts in scenery accompanied by audio cues draws players into the game’s written narrative and ultimately provoke the question of who the player as the main character is.

SU then expands upon the concept in “Lab Conduct”: The player character is given a name, Mr. Aition, and audio is presented in stereo, multi-directional; so, players become a concrete individual in a defined space. Although the nature of horror and tension changes between these first two chapters, the sound design maintains a theme of small audio details belying larger impacts. For instance, did you notice the shuffling (or is it breathing) toward the end of “House Abandon”? Or the clicking at the end of “Lab Conduct”? As for “Station Process,” the introduction and final dialogue of the female character is painfully distant and chilling. SU’s world is crafted of elaborate facades concealing the devastation of innocuous behaviors, and its sound design magnifies the intensity and gravity of these implications. 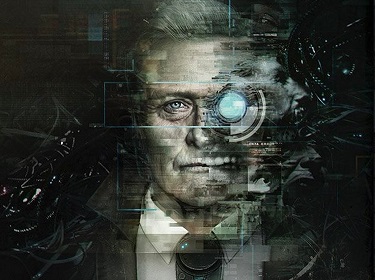 Rutger Hauer might have been chosen for Observer due to his ties to Blade Runner; but, his voice also immediately sets the tone for the game’s sound design. His accent, stilted patter, and the occasional quality manipulation create a mechanical undertone. The effect is one of an organic voice still in the process of undergoing a digital transformation, a concept that echoes Observer’s grander premise.

In fact, the majority of dialogue in the game is done either through radio or intercom with human interaction primarily limited to dreams. Even a dying victim who Daniel comes upon only speaks via a device akin to an electrolarynx. The exception is the landlord, Janus (voiced by famed Polish actor Arkadiusz Jakubik), who suffers speech disfluencies, likely a product of his own cyborgian transformation and the mental impact of the war that demanded it.

The main soundtrack is cyberpunk oriented; but, a seqeunce with a surprisingly peaceful interlude of classical music appears to be a nod to developer Blooper’s previous game, Layers of Fear. The sequence breaks up the persistent parade of disconcerting and unpleasant sounds inhabiting the Stacks. Rather than using discordance, Observer’s audio design seems to focus on abject noises with mechanical and organic sounds that hover distressingly at the edge of familiar—an aural cracked door with all its tantalizing and foreboding possibilities.

While the Souls franchise has often been praised for its soundtracks, fan revelations and speculations suggest the music of Dark Souls III to be more instrumental to the game than merely providing ambience. The theory proposes that DSIII’s boss battles are essentially choreographed to their respective background tracks. Although the idea has gained traction across the internet, developer FromSoftware has yet to confirm whether this subtle rhythm-action gameplay was intentional. The evidence is tantalizing nonetheless:

Most of the boss soundtracks in DSIII are predominantly 4/4 time, the most common time signature. The time signature is the count of beats into a measure and typically a good indicator of how often downbeats (beats that emphasize the rhythm) fall. Vordt of the Boreal Valley is a good example of 4/4 time.

However, Dark Souls’ downbeats are misleading: Many downbeats, including Vordt’s, are used for movement and/or wind-up while attacks occur in the remaining counts. So, if a player anticipates an attack on the strongest or most defined beat of a measure and dodges or guards, they’re likely to dodge directly into the actual attack or prematurely guard and fail to maintain it through the duration of the attack—aka “get bodied.” While the base formula of attacks avoiding the downbeat is decently reliable across the game, the time signatures change. A number of bosses are in alternate time signatures, and at least one seems to change in the middle of his battle.

The Dancer of the Boreal Valley has been one of the driving forces behind the rhythm-action theory. Furious internet consensus is she breaks all the rules. However, it might be more she breaks the aforementioned ones: Her fight appears to be in 6/8 time (which is different from 3/4—but that has its own place and time), and many of her attacks actually strike on the downbeat. The lack of an easily discernible bass line coupled with the Dancer’s echoing steps also serves to disrupt the player’s rhythm. These incongruencies can easily throw off an Ashen One conditioned by hours of gameplay. Oddly enough, although the quest narrative might suggest otherwise, the Dancer can be challenged at almost any point in the game after gaining access to the High Wall of Lothric. The early opportunity potentially says a lot about Dark Souls’ lore and design. While the Dancer most blatantly breaks the mold, she’s not the only boss in 6/8 time; and, the boss purportedly responsible for her title and swords is a phenomenal example of this musical theory overall.

The Abyss Watchers appear in 6/8 time; and, while they’re tendency to spawn as a trio might follow gaming’s “rule of threes,” it possibly also makes it easier to coordinate attacks to the unique time signature. Others have suggested that the Abyss Watchers move in 4/4 time, which might be true when each Watcher is viewed individually. In fact, each Watcher moving in 4/4 time within a 6/8 measure would likely ensure attacks would persistently overlap, i.e. as long as two Watchers are standing, better watch your back—It’s basically the world’s deadliest round.

Some have compared DSIII’s music-based tactics to a lyrical “call and response,” which nails the coordinated aspect of the boss fights but suggests more mimicking or a predictable response on the player’s part. An alternate analogy is that the DSIII bosses are the leaders in couples’ dances, which share a few concepts with conventional fight choreography. Pontiff Sulyvahn not only demonstrates this idea well, but he is aesthetically and narratively tied to the Dancer, and it’s strongly suspected his music changes time signatures and tempo mid-battle. 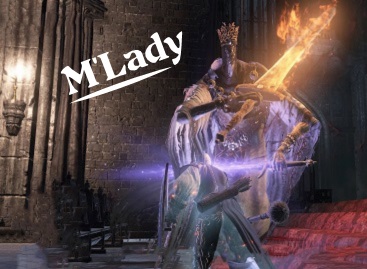 Most of the Pontiff’s fight is in 4/4 time, but it doesn’t start that way. His battle likely begins in ¾ time—a signature often confused with 6/8. The change occurs when he generates his shadow half, and the tempo increases.

A key point is that the Pontiff has a home stance in which he withdraws his swords toward his body. This lapse of attack is often equated with formal training and appears to be an intentional pause in which the Pontiff is anticipating the player’s response. Whether the reply is aggression or evasion, ideally the home stance would prepare him to guard, move in pursuit, or wind up for a strike. Like the leader in a dance, the Pontiff can hope to provoke a specific reaction (ideally aggression—the “run into my fist” tactic); but, it’s not guaranteed, and he’s forced to accommodate his partner’s, the player’s, response regardless. Identifying these openings in which the boss is awaiting the player’s response as per their choreography is a vital key to Dark Souls strategy.

Rhythm-action elements in action games and RPGs aren’t revolutionary, appearing in popular titles such as Super Mario RPG (reprised in Paper Mario) and Bayonetta; thus, its subtle execution in DSIII possibly contributes to its surprisingly accessible gameplay. While this design choice might grant the game wider appeal, it doesn’t detract from its difficulty and cultivates another layer of complexity. The correlation of fighting styles to choreography, near-fluid application of choreography to music, and the subtle transition between world-building ambience and rhythm-oriented boss battles places Dark Souls III at a pinnacle of current video game sound design. Now, an important question is: Does this theory apply to other Souls titles as well?

These recent titles demonstrate the importance of sound design in creating immersive games. Do you have a favorite on the list? And, since this just scratches the surface, what other games of the last five years do you feel contribute to the industry’s innovation? How does a game’s audio design, be it the atmospheric effects or soundtrack, influence how you play or interpret the story? Whether you play on mute to avoid the jump scares or pump the directional audio to track digital denizens, let us know!

One thought on “For the Groove of the Game”